October was a noteworthy month for the Lackawanna & Wyoming Valley Chapter of the NRHS. Over a long weekend from October 11th to the 14th the L&WV Chapter celebrated its 45th Anniversary and also hosted the NRHS National Conference to coincide with it. Although it was a few weeks earlier than the actual anniversary date it was decided to celebrate it over
these days so that NRHS National officers and Advisory Council members from all across the country could celebrate with us while in town for the Fall National Conference.

Planning for the 45th Anniversary and Fall Conference started well before the events took place. Seventeen months ago on a May afternoon in 2017, the combined 45th Anniversary and Conference planning committee met in chapter President, Vee Pauli’s kitchen, to discuss what activities and events could be planned for the weekend and also what the needs for the National Conference would be. The planning committee included Vee Pauli, Norm Barrett, Ken Kertesz, Tim O’Malley, Tony Verbyla Jr., and Joe Boshek. Many options were discussed and after much deliberation a plan for what form the weekend should take was hashed out. The Radisson Lackawanna Station Hotel in downtown Scranton was chosen as the obvious choice to serve as the base of operation and banquet location over the weekend. Ken
Kertesz, with his wealth of experience in event planning for the Brotherhood of Locomotive Engineers, took on the task of negotiating and coordinating our needs with the Radisson.

The Radisson Hotel’s history as the Lackawanna Railroad’s showpiece station and division headquarters in Scranton was a big part of our decision use it. The Radisson also offers several on site dining options, banquet options, a convenient downtown location, free airport shuttles, and necessary business meeting rooms which are all requirements when hosting a National Conference which sees attendees from all across the country.

The events kicked off on Thursday, October 11, when the registration table opened near the front desk at the Radisson Hotel. Neil Weinberg, Tim O’Malley, Tony Verbyla Jr., and Helen Shaak from the Lancaster Chapter, setup and opened the registration table at 3pm and began checking in the many out of town visitors for the NRHS Fall Conference.

Later, at 7pm that night, the first of two free slideshows were held at “The Platform” on the backside of the Radisson hotel. The Platform is so named because it was actually the loading platform for Lackawanna and EL passenger trains. Up until 1970 is was still possible to board a passenger train bound for Chicago at the exact spot where we were now enjoying a slideshow.

For the Thursday night slideshow, Ed Philbin gave a program on the history of the Lehigh Valley’s Mountain Cut-off and Ed Zech presented color railroad photography by the late Ed Miller.

Friday, October 12 began with Neil Weinberg opening the registration table at 8am and attendees preparing for the 45th Anniversary train ride on the Delaware Lackawaxen & Stourbridge Railroad. Bus transportation to Honesdale was provided for the many passengers who were staying at the Radisson Hotel. Arriving at Honesdale at 9:30am, passengers had 30 minutes to inspect and photograph the various pieces of equipment the Stourbridge Line has on display in Honesdale.

Passengers enjoyed the 50-mile roundtrip to Lackawaxen and return
which included two photo runbys. Power for the train was the beautiful PRR-painted FP-7 and Stourbridge Line BL-2 the railroad operates. DL&S owner Tom Myles was on board as well and made several rounds through the train talking to passengers about his railroad and railroad  experiences in a career that started on the PRR (his love of the PRR quite apparent!). Upon arrival back in Honesdale, passengers had 45 minutes to photograph the excursion train or visit the Wayne County Historical Society Museum to see the D&H built replica of the Stourbridge Lion, first steam locomotive to operate on the North American continent in Honesdale on August 8, 1829. The return bus ride included a stop in Waymart to view a D&H Gravity Railroad coach and a drive by the D&H Gravity Railroad Farview Station.

Friday night Jerry and Sam Kuczynski manned the registration table while attendees enjoyed another free slideshow on “The Platform”. Chapter members, friends of the chapter, and NRHS National members enjoyed Jim Kilcullen show on local railroads in the 60’s and 70’s and Norm Barrett showed his program “Railroading: The Good, The Bad, The Ugly” which
presented case studies of the many railroad accidents and incidents he investigated during his career as a Road Foreman and Trainmaster on the D&H.
Saturday, October 13 Bob Young of Kingston opened the registration table at 7am and was assisted later in the day by Adam Budney and Roger Salerno. The NRHS Fall Conference business meetings began a few minutes late in Ballrooms 1&2 at 8:30am. The Advisory Council meeting was the first meeting of the day. The Advisory Council is comprised of the National Representatives from every chapter, myself being the Advisory Council member from the L&WV Chapter. The Advisory Council discusses NRHS business such as budgets, building membership, fund raising, and improving programs like Railcamp or Heritage Grants that the NRHS runs. From its discussion and debates, recommendations are made to the NRHS officers and Board of Directors. This arrangement of the Advisory Council advising and making recommendations to the NRHS officers and Board of Directors serves as a direct link for chapters and members to influence the direction of the NRHS.

The L&WV Chapter 45th Anniversary Banquet was held in the famed glass topped lobby of the Radisson Lackawanna Station Hotel. The cash bar began at 7pm with the ceremony beginning at 7:30pm. Ken Kertesz and Vee Pauli choose the menu and other pertinent aspects of the banquet ceremony. Tim O’Malley and Vee Pauli developed the themed place setting
favor of the L&WV Chapter “Hobo Mug” with an engineer’s handkerchief tastefully placed in the mug. Chapter President Vee Pauli served as banquet host welcoming guests with a comments on the chapter and its history. Tony Verbyla Jr. spoke of the NRHS National Conference and the 60-plus visitors from across the country joining us at the banquet. He also honored NRHS officers and our District 2 directors, noting the tough job of the many volunteers in the NRHS National who keep the organization in good working order.

Guests were entertained with three speakers throughout the night. Joe Boshek arranged for local personality and former WNEP chief meteorologist, Tom Clark, to be a key speaker. Tom Clark, also a railfan and model railroader, spoke of the region’s rich railroad history and the role the L&WV Chapter has played in preserving it. Also mentioned in his talk
was the popular and controversial WNEP Backyard Garden Railroad. Tom Clark then served as host providing introductions to our two guest speakers from the railroad industry. Tom Myles, the owner of the Delaware Lackawaxen & Stourbridge Railroad, who graciously hosted our
Friday excursion, was our second speaker discussing his career in the railroad industry working for the PRR, Penn Central, Conrail, and CSX in many positions and locations throughout the systems. He also spoke of future plans for his Stourbridge Line operation.

He was followed by Jim Ogle, NS Northern Region superintendent. Jim Ogle spoke of the rich history of NS and its operation in our region. The banquet ended with closing remarks from Tom Clark and Vee Pauli at 10pm.

The final activity of the 45th Anniversary-Conference weekend was on Sunday, October

The many out of town attendees for the NRHS Fall Conference visited Steamtown National Historic Site and rode the Steamtown excursion to Moscow Station. For some attendees this was their first visit to Steamtown and an exciting activity for them. The Delaware Lackawanna Railroad also put a wide variety of their ALCO locomotives on display near the boarding
platform for out of town visitors to photograph. The excursion departed Steamtown at 12:30pm with Delaware Lackawanna 405 & 2403 leading. Train conductor and chapter member, Andy Ottinger, agreed to make a station stop at Radisson Lackawanna Station Hotel to pick up conference attendees who preferred to board the train at the hotel. Upon arrival at
Moscow, NRHS conference attendees had the opportunity to inspect the Moscow Station and Freight Station which are maintained by L&WV Chapter volunteers. Conference attendees got to see the many L&WV Chapter volunteers in action while at Moscow as well. The weekend
concluded with the train’s arrival back in Scranton.

The 45th Anniversary/Fall NRHS Conference weekend was a challenging but rewarding experience. It required many hours of planning and work from all of the committee members. It also would not have been possible without the help of many other chapter members who have pitched in to help in different ways leading up to and throughout the weekend. Thank you to all
who helped out in the planning and operation of this weekend! Also, just as important are the chapter members who attended the different activities offered over the weekend. When you attend a chapter event you are not only supporting the NRHS and the L&WV Chapter, you are
also supporting the members who have taken on the task of planning such events.

The support of fellow members means a lot those doing the planning.
We also have to thank the NRHS National members who travelled to Scranton from across the country, even as far away as Tacoma, WA and Portland, OR to attend the Fall Conference. Many compliments were received regarding the weekend and our generosity to
host the NRHS National for the conference.

As on the local level, the operation of the NRHS National rests on volunteers and chapters who take the initiative to take on such projects and
make the NRHS a successful organization. The L&WV Chapter is fortunate to count itself among some of the larger and more active chapters and can be proud of the fact they’ve hosted quality event for the NRHS, showcasing the dedication our chapter shows to railroad history. 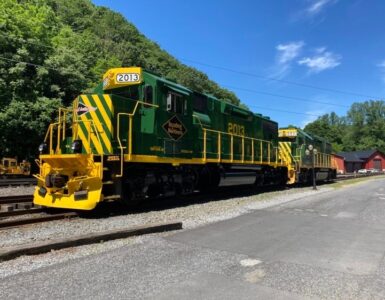 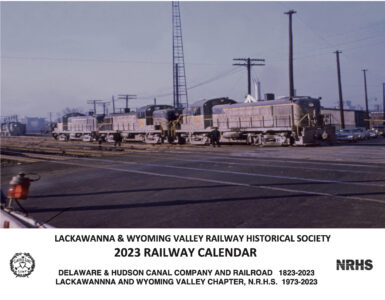 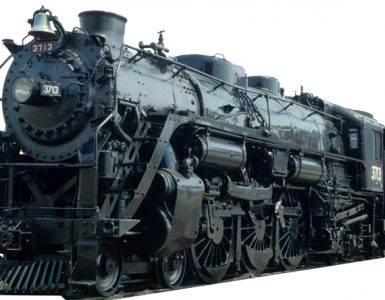